DAY 1 – TEL AVIV
Arrival to Tel Aviv. Meeting and assistance at the Ben Gurion International Airport by the E.S.T. representative and transfer to your hotel.
Dinner and overnight: Center

DAY 2 – TEL AVIV / JAFFA
After breakfast, visit Jaffa from where Jonah embarked for Tarshish and where Peter had the vision of the pure and impure animals.
Panoramic view of Tel Aviv and onward to visit this modern city, Israel's second largest city and the country's financial capital and business center. Tel Aviv is the oldest city in modern Israel. Visit the Independance Hall, where in 1948 Ben Gurion declared the the State of Israel. Then pass in Rabin Square where the charismatic Prime Minister and Nobel Prize winner for Peace was murdered and on to the Disapora Museum. Find your jewish roots in this unique place of jewish history.
Onward to a tour through the White City, a collection of more then 4000 Bauhaus style buildings, the largest in the whole world. The White City was declared UNESCO world cultural heritage site in 2003. 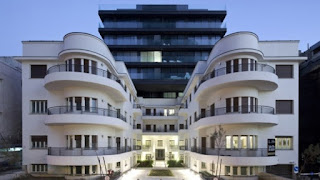 DAY 3 – CAESAREA / Mt CARMEL / NAZARETH / TIBERIAS
Start the day with a visit to Caesarea, ancient roman capital, where Paul was tried by Festus. Visit the excavations of the ancient city, the Roman theatre, aqueduct and port.
Keep until Megiddo, ancient city erected by King Salomon.
Then continue to Mount Carmel, to visit the Muchraka, site of the Prophet Elijah's contest with the prophets of Ba'al. See the amazing view of the Yizre'el Valley.
Onward to Nazareth, the village of Jesus where He was raised.
Dinner and overnight: Tiberias

DAY 4 – GALILEE
Visit the places in the Galilee where Jesus developed his ministry: Mount of Beatitudes, Tabgha (site of the Miracle of Fishes and Loaves), Primacy of Peter, the ruins of ancient Cafernaum, with its ancient synagogue and the house of Peter. Cruise the See of Galilee on a wooden boat. Then visit Banias, the Caesarea Filipe, where Jesus told Peter to found His church.
Dinner and overnight: Tiberias
DAY 5 – JORDAN RIVER / JORDAN / JERASH / Mt NEBO / AMMAN
Start the day with a visit to the Yardenit, baptismal site on the Jordan River where thousands of pilgrims are baptized every year. Continue along the beautiful Jordan valley to the Sheick Hussein border crossing (Beit Shean). Border proceedures and meeting with the E.S.T. Jordan representative.
Visit to Jerash, one of the Decapolis cities and the largest roman ruins in the Middle East.
Continue to Mt Nebo, from where Moses look upon the Promised Land and where it's believe that he later died.
Onward to Amman, the Jordanian capital.
Dinner and overnight: Amman

DAY 6 – PETRA
Early departure to Petra, one of UNESCO's new wonders of the world, and visit to this ancient city of the Nabataeans, where the people of Israel passed on their way from Egypt and, presumably, the burial site of Aaron, Moses's brother.
Dinner and overnight: Petra

DAY 7 - ARAVA VALLEY / NEGEV DESERT / BEERSHEBA / ARAD
Departure Petra to Aqaba, near the Red Sea, and cross the border back to Israel. Meeting and assistance by an E.S.T. representative.
Itinerary through the Negev desert on the footsteps of the Hebrew tribes following deliverance from Egypt.
Visit the Desert's Tabernacle, Ramon's crater, and arrival to Beersheba to visit Abraham's well.
Dinner and overnight: Dead Sea

DAY 8 - MASADA / QUMRAN / DEAD SEA / JERICHO
Start the day with a visit to Masada, old fortress build by Herods, where 960 Jews committed collective suicide not to surrender to the Romans. Climb the mountain via the Roman Rampart.
Onward to Qumran, where in 1947 the famous Dead Sea Scrolls were found. Visit to the archeological site.
Then, time for diving and relaxing at the Dead Sea.
Afterwards, visit to Jericho and Temptation Mount.
Ascend to Jerusalem.
Dinner and overnight: Jerusalem

DAY 9, 10, 11 - JERUSALEM AND BETHLEHEM
During theses days you will visit Jerusalem, its hills and surroundings.
Mount Scopus, site of the Hebrew University and the Botanical Garden of Jerusalem.
Mount of Olives for an amazing panoramic view of the Holy City, Gethsemane gardens for contemplation and private prayer and Mount Zion with the Cenacle (site of the Last Supper and of the Pentecost's) and the tomb of Kind David.
The Western Wall, Temple Mount (site of the Omar and Al-Aqsa mosques) and Ophel museum (with virtual representation of Jerusalem's life in Jesus days). Tour the amazing Western Wall tunnels and discover real Jerusalem from before 2000 years.
Walk the Stations of the Cross along the Via Dolorosa.
The City of David via the Kidron Valley and cross the famous tunnel craved in the rock before 3000 years until Siloam's pool.
The Gardens Tomb and the Golgotha.
Touching visit to the Holocaust Memorial Yad Vashem and the new city of Jerusalem, driving via the Knesset (the Israeli parliament) and the Menorah, Israel's state symbol.
The Israel Museum, where the Dead Sea Scrolls are kept in the Shrine of the Book and the model of Jerusalem from the 2nd Temple period, the time of Jesus.

Yad Hashmona, a Messianic Jews community, and their biblical park.
In Bethlehem visit the Nativity Church, site of Jesus birth. Go to St. Jerome cave, where he lived and translated the bible to Latin and the Sheppard's Field
Dinner and overnight: Jerusalem

At your last day in Israel, transfer to Ben Gurion Intl. Airport.
Boarding assistance and flight back home.