Easter in the Holy Land (for Catholics) – 10 days (in April)

DAY 1 - ARRIVAL TEL AVIV – HAIFA
Arrival at Ben Gurion Airport – Tel Aviv - Welcome and assistance from your guide.
Transfer to Stella Maris convent. Stella Maris monastery arrival mass.
During the night: one hour of prayer at the cave of Elijah.
Dinner and night at an hotel nearby.

DAY 2 -  HAIFA – MT CARMIEL - MOUNT TABOR
Tour of the cave of Elijah, known as the place where the holy family rested on their way back from Egypt, the hanging gardens of Haifa/ The Terraces of the Bahai faith. Then direction the Muhraka, where the Prophet Elijah confronted Baal prophets.
Lunch break
Possibility to visit Sepphoris, Center of the Lower Galilee, since the Second Temple during the 4th Century – According to tradition, Sepphoris is the city where Mary was born and where her parents lived. A crossed church was built, dedicated to Mary’s parents, St Anne and St Joachim. Then towards Mt Tabor, tour of the Franciscan Church of The Transfiguration (Psalms 89:12). Mount Tabor Service
Dinner and night at an hotel nearby.

DAY 3 – SEA OF GALILEE - CAPHARNAUM - TABGHA – YARDENIT
After breakfast, panorama from the Mount of Beatitudes (Place where Jesus Christ uttered the Sermon on the Mount).  At the top of it, we will find an octogonal church, as a symbol of the 8 Beatitudes of the Gospel.
Cruise on Tiberias lake. Tour of Jesus boat at Igal Alon museum.  St Peter fish straight from the sea for lunch !
Then Capharnaüm, foster city for Jesus, to see Saint Peter ruins and the synagogue. “ Mary took her son to Capharnaum”
Visit of Tabgha(Luc 9:10-17), with a tour of the Church of the Primacy of St Peter, which commemorates the miraculous fishing, and The Church of the Multiplication of the Loaves and Fish to see its fabulous mosaics. Yardenit, renewal of vows of baptism in the Jordan River.
Dinner and night at an hotel nearby.

DAY 4 - NAZARETH – CANA – JERUSALEM
Then, Cana in Galilee, where happened Jesus’s first miracle, during a wedding. He changed water into wine. But also where « Mary is introduced as Jesus’ Mother and contribute to the first signs of Jesus » Renewal of vows for weddings in Cana.
Nazareth, tour of the Church of the Annunciation, Mary’s Well ( The Spring), in the Greek Orthodox Church, International Center Mary of Nazareth. Tour and Lunch Break

On the road to Jerusalem on road 6, where we can see the Chapel of “Notre Dame de l’Effroi” « where Mary saw its inhabitants trying to precipitate Jesus from the Mountain ».
3:30 PM Arrival to Notre Dame of Jerusalem Center.
5 PM Service and Foot washing at St Etienne Church
Dinner and night in Jerusalem.

DAY 5  – GOOD FRIDAY FAST
In the morning, we will start with Dominus Flevit, followed by the Garden of Olives or Gethsemani. Then, the Way of the Cross (Via Dolorosa) and the Antonia Fortress – the pool of Bethesda and St Anne, built under Anne and Joachim’s house, where Mary has grown up; from the Probatic and the Esculape sanctuary, opening up on the Holy Sepulcher and exaltation of the Holy Cross. The stations related to Mary are the 4th « where Mary suffered from seeing her son carrying the cross”, the 10th, 12th and 13th.
The Franciscan Chapel of the Blessed Sacrament, also known as The Chapel of the Apparition, as a memory of the meeting between Jesus and his mother after Resurrection.
Snack around 3PM at Notre Dame of Jerusalem Center.
5 PM - Office of the Passion at Saint Etienne Church.

Good Friday prayers are a reference to the prayer for the Jewish people. « Let spray for the Jewish People, whose God talked to, first: may they advance in the love of His name and the faithfulness of his covenant. They all pray in silence. Then the Priest says: Almighty Lord, you choose Abraham and its progeny, drive to the fulfillment of redemption the first covenant people, as your Church plead you. Jesus, Christ, our Lord ».
Dinner and night at your hotel, Notre Dame de Jerusalem.

DAY 6 - JERUSALEM – MT ZION – MT OF OLIVES
After breakfast, Mount Zion with King’s David’s Tomb, and the Cenacle “where Jesus celebrated the Last Supper and took his last meal, where all the apostles gathered with Mary after Jesus died and where the Holy Spirit manifested during Pentecost, this place is considered as the Mother Church”
Contemplation of biblical texts related to the Eucharist and Foot Washing.
The Dormition Abbey « Hagia Maria Zion, wood and ivory statute, as Mary in her eternal sleep » Tour of the Church of St Peter in Gallicantu, in the middle of the Jewish and Byzantine Jerusalem vestiges.
Lunch in a restaurant
Then towards the Mount of Olives, Bethphage « commemoration of Jesus Christ visit to Marthe, Lazarus sister, after his death. Bethphage is in between Bethanie and Jerusalem. This Church is dedicated to St Zachariah, author of the Donkey Prophecy.  Pater Noster in the Chapel of the Ascension (Eleona). Back to the hotel to rest before the vigil.
In the evening, the Easter Vigil at the French Biblical school, St Etienne Basilica.
Dinner and night at an hotel in Jerusalem.

DAY 7 - BETHLEHEM
Easter Sunday and Christ resurrection.
Resurrection Mass.
Western Walls for prayers and contemplation
Then departure to Bethlehem. On the road, The Rachel’s Tomb, often associated to the Virgin Mary. The Milk Grotto, where Mary breastfed Jesus. Enjoy the King David city, then tour of the Basilica covering the grotto of the Nativity. The original sanctuary was edified during the IV century, by Constantine the Great. St Jerome worked there, meditating and translating biblical texts. Lunch in Bethlehem. Visit of the Shepherds fields, where, according to an old tradition, they have learned about the birth of the Christ. Shepherds fields’ panorama.
Dinner and night at an hotel in Jerusalem.

DAY 8 - DEAD SEA
06:30AM Mass at the St Sepulcher (Tomb)
Breakfast at Notre Dame of Jerusalem. First stop at Bethanie with Lazarus tomb. Then toward Jericho – one of the oldest city in the world. Tour of Jericho, The Mount of Temptation, where Jesus fast during 40 days. Go up to the mount with a cable car. We will then move towards Qumran where were found the famous Dead Sea Scrolls. Enjoy the Dead Sea at Kalia Beach, the lowest point on Earth. The Dead Sea water contains more than 30% of salt and minerals . 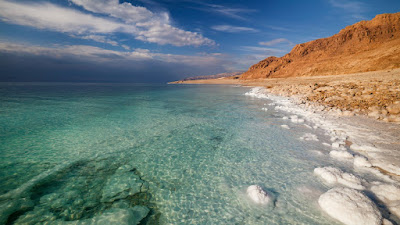 Easter Lunch in a private space. Free time in Qumran, to buy Dead Sea products.
Back to Jerusalem.
Dinner and night at an hotel in Jerusalem.

DAY 9 – JERUSALEM – EMMAÜS – TEL AVIV
06:30 AM Mass
We will visit the Israel Museum and the Shrine of the Book where are exposed the famous Dead Sea Scrolls, as well as the Jerusalem model as it was during the Second Temple. We will pass by the Knesset (Israeli Parliament) and The Court House.
Ein Karem with the Church of the Visitation and St Jean Baptist Church. Prayer at the Church of the Visitation.
Visit Emmaus Abu Gosh Benedictines (City where the Christ, resurrected, appeared to two disciples). Brother Oliver and the abbey of St Mary of the Resurrection.
Lunch at Yad Hashmona and back to Tel Aviv.
Dinner and night at an hotel, in Tel Aviv.

DAY 11
Transfer to the Airport for your flight back
Departure from your hotel around 2/2:30 AM